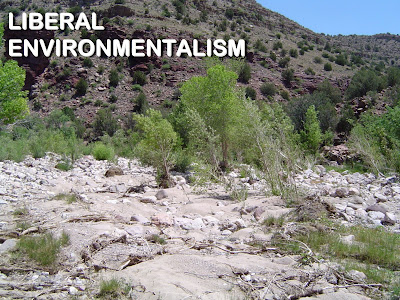 In the mid-1990s, two environmental groups intimidated the U. S. Forest Service to remove grazing from along the Verde River in central Arizona. The reason? The groups alleged the cows were a threat to a ”threatened” fish — a 3″ native minnow called the Spikedace. When the Forest Service caved to the groups’ threatened lawsuit and halted grazing along the river, trees invaded streamside meadows such as the one with the cowboys riding through it displayed on the header at the top of the your screen. Cattle acting as mowers had kept these lush oases relatively free of trees for more than a hundred years. Removing grazing, however, caused a dramatic ecological change along the entire ”protected” area. When floodwaters coursed through these transformed meadows the invading trees created turbulence which in turn caused erosion. The result is shown in the photo above.

The final irony in all this is: no spikedace have been seen in the river since it was ”protected,” but plenty were seen before that. What that means, in my estimation and the estimation of the government’s own scientists, is this — Liberal Environmentalism extirpated a threatened species. 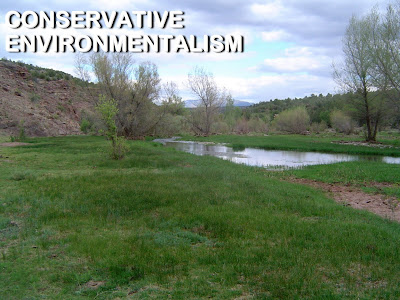 CONSERVATIVE ENVIRONMENTALISM
The second photo shows one of the areas along the Verde that is privately owned. It continues to be grazed and managed by one of the ranchers who has remained in business in spite of Forest Service policies. On this section of the river, which is managed according to the principles of Conservative Environmentalism, the meadows remain intact.

Which one works best?

What do you want? 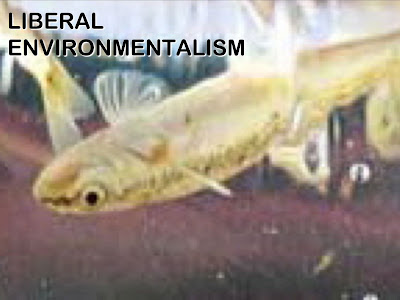 WHAT HAPPENED?!
(no spikedace were harmed in the making of this slide – I turned a photo upside down.)
When government scientists took note that the removal of grazing along the Verde had apparently altered the habitat in such a way that it had become inhospitable to spikedace, they proposed a study to confirm or deny this. Such a study, they hypothesized, might enable them to avert the total disappearance of spikedace from the Verde. The study might have done just that if not for a regional Forest Service fisheries biologist who was simultaneously serving as an officer with an environmental group publicly campaigning to remove grazing from all public land. This administrator used the opportunity provided by her position with the Forest Service to discredit the scientists and their proposed study. The harassment became so intense one of the scientists, the top native fish expert in the southwest, retired and left Arizona. The two other scientists on the team were replaced and the study scrapped.
To this day, none of the environmentalists nor the federal employees responsible for the demise of the spikedace and the serious reduction in numbers of the rest of the upper Verde’s native fish have been held accountable for this ”taking” of a threatened species even though it is a federal crime. None have expressed regret that their action exterminated a population of a threatened species, nor have any of them proposed reversing the policy.

Instead the liberal environmentalist groups and the federal and state agencies involved have proposed to poison the river and to continue doing it periodically to kill the nonnative spikedace-eating predators that have thrived in the river since grazing was removed and the character of the habitat changed. After each poisoning they would restock the river with spikedace. They would have to stock it with more than spikedace because, ironically and tragically, the poison they would use would kill every living thing in the river with gills. That would include any other rare, threatened, or endangered species that live there, unknown numbers of invertebrates (which spikedace eat), and any spikedace that might have managed to survive the environmentalists’ first ”solution.” Note that in other streams in which this poison has been used the living community has never fully recovered and any benefit to the species supposed to ”benefit” has been temporary and illusory. Note also that the new spikedace would be stocked into a deep, cool, mud-bottomed river that is not longer suitable habitat for them.

Compounding the absurdity of this tragedy, the poison which the government and the enviros intend to use has been linked by published scientific research to the onset of Parkinson’s disease in humans. 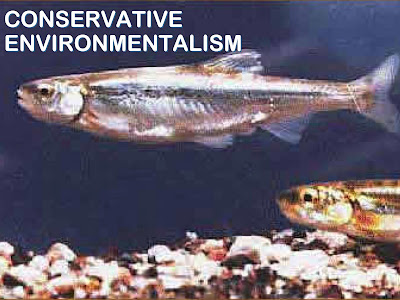 THE CONSERVATIVE ALTERNATIVE or
WILL THE REAL ENVIRONMENTALISTS PLEASE STAND

When cattle grazing along the Verde was first alleged to be a threat to the spikedace and other native fish in the river, one rancher— a political conservative —immediately volunteered to move his cattle off Forest Service lands along the river on which he was leasing grazing access. He even voluntarily removed his animals off his private lands along the river, which he was not required to do. More than that, he enlisted friends to help plant willow saplings every ten feet on both sides of the river for 4 miles to help the river ”return to nature.”

When it became clear that removing grazing wasn’t helping the spikedace, but was actually causing its numbers to plunge, this same rancher offered to resume controlled grazing of cattle along the riverside to try to restore it to a spikedace-friendly condition. (Controlled grazing means he would manage his cattle to achieve environmental goals as well as production goals.)

Beyond that, he offered to rewater an archaic stretch of riverbed with water he would normally use for irrigating crops and create a refugia in which to raise young spikedace to restock the river. The Forest Service turned down his offer to restore the habitat, and the Arizona Game and Fish Department blocked his plan to create a refugia for the fish.

When this happened the rancher pointed out to the Forest Service that the agreement he had signed with them when he removed his cattle from along the river contained the provision that, if this action didn’t work to bring back the fish, he could put his cows back on the river. When the USDA refused to keep this agreement he teamed with other ranchers and conservative activists to bring to light the fact that there were other situations, similar to the one on Verde, in which liberal environmental solutions had actually caused harm to the environment. And that there were activities generally associated with and championed by political conservatives (ranching and farming) that had benefited it.

For example, the government’s own researchers had determined that the largest known populations of spikedace and loach minnow (another ”Threatened” native fish) occur on the Gila River in New Mexico where livestock are present or where other agricultural operations impact the river.

Adding weight to the claim that conservative environmentalists can be an endangered species’ best friend (and liberals their worst enemy), on two other streams in Arizona livestock exclusion was followed by the disappearance or severe reduction of populations of another threatened species, the Gila topminnow. Again, on other sections of those same streams, or on nearby streams, controlled grazing continues and so do the fish.

With that in mind, Verde River ranchers and their allies have been pressing for ”equal protection under the law.” This would require that environmental laws be applied to environmentalists as well as to other users of the land.

Currently, with liberal environmentalism calling the shots, this is not the case. Before the removal of grazing from along the Verde, the ”scientific studies” used as a justification for this action were collections of unproved assumptions and urban legends about how protection would benefit the environment and how grazing and other human activities threatened it. No consideration whatsoever was given to the fact that controlled grazing or any other human use would or could have any positive impacts on any aspect of the environment, including the health of native fish populations. Nor that the removal of these activities could have any negative impacts.

This myopia continues to be standard operating procedure on other streams in the American West in spite of what has happened on the Verde. Liberal environmentalists are still demanding the complete removal of controlled grazing from native fish habitat in direct contradiction of the best scientific information available, and agriculturists are continuing to be villainized without any consideration of scientifically supported evidence that they might be the primary reason why the habitat supports natives fish at all.

Members of the conservative coalition moved to action by the environmental debacles on the Verde and elsewhere are lobbying state governments and federal agencies to require that environmental decisions be based on studies that consider the positive value to the environment of productive human activities and the negative impacts of removing those activities.

Included in that campaign is an effort to require consultation with the EPA before any wildlife agency can release poison into the environment for any reason. At present this rather conservative measure, which is required by federal law, has yet to observed in cases of poisoning the nation’s waters to achieve liberal environmentalists’ ”species recovery solutions.”

“¢ Not only extirpated the threatened fish they supposedly were ”saving,” but altered the habitat in a way that harmed the food web on which those fish depended, many other species, other environmental functions and values, and the lives of people who were actually a boon to the values the environmentalists claim they were trying to save.

“¢ Got a free pass on all of the above by being the beneficiary of political and media prejudice that groups ”protecting” the environment can do no wrong.

“¢ Have accepted no responsibility or ownership for what they have done and to this day are continuing to try to expand this failed approach to more and more streams.

“¢ Tried to deflect responsibility for the harm they had caused by intimidating and working to discredit scientists who pointed out that their program was creating the exact opposite of what the environmentalists contended it would produce.

“¢ Tried to cover up and remedy the disaster they had created by doing something that was even worse: releasing a poison into the environment that effected even more species, made the results more permanent, and poses a confirmed threat to human health.

“¢ Ranchers played an important role in sustaining a healthy population of native fish (including spikedace) in the Verde River for more than a hundred years. In southern Arizona, ranchers have performed this function for more than 300 years.

“¢ When the Verde ranchers were told they were causing a problem (even though it wasn’t true) at least one of the ranchers voluntarily removed his cattle from the river and even went the extra mile of planting thousands of willows to speed the river’s recovery.

“¢ When it became obvious that the removal of controlled grazing was harming rather than helping the fish, ranchers offered to resume what did work and even went ”above and beyond” to use their crop irrigation water to create a fish ”nursery” to help bring back the spikedace.

“¢ Ranchers cooperated with scientists to find out what was really going on. Liberal environmentalists refused to do so, and harassed scientists in order to create a coverup.

“¢ Based on the findings of those scientists, ranchers continue to provide the only habitat on the Upper Verde River where native fish continue to hold on.

“¢ Served as advocates for the environment and for the humans harmed and potentially harmed by the destructive actions of liberal environmentalism.

“¢ Conservatives honored their agreements. Liberals did not.