WE REPORT, YOU DECIDE

This post gives you the opportunity to judge the results of Conservative Environmentalism versus the results of Liberal Environmentalism via compared photographs, Unless otherwise noted, the photos were taken in the same area (in some cases the areas were directly adjacent to one another) at relatively the same time. In cases where the methods used to get the results shown aren’t obvious, those methods are illustrated with a simple photo sequence showing the techniques applied. 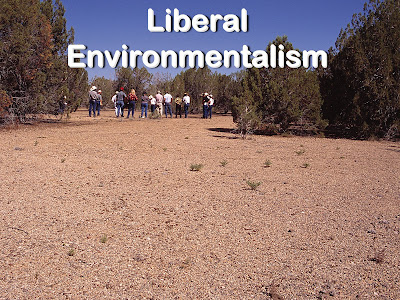 (Click twice, get a good look at the bare ground.)

This first photo shows an area in Central Arizona on which the land management strategy Liberal Environmentalism says will heal all that ails the land has been applied. This land has been protected from all use by humans since 1946 when a fence was erected around it to create a study plot. What did this plot look like when it was first protected? ”Pretty much like it looks now, but the trees were smaller,” said the scientist currently in charge of the study. According to the theory of Liberal Environmentalism this land has been ”returned to Nature” and is as healthy as is possible considering what had happened to it up until it was protected. 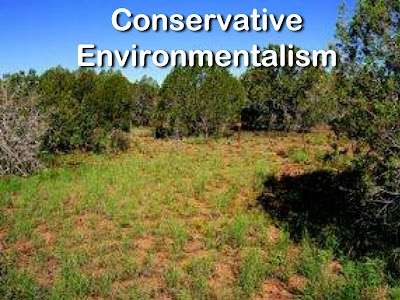 The land in the first photo, the one labeled ”Liberal Environmentalism” Is the result of a restoration using the bedrock tactic of Liberal Environmentalism — protecting the land from human use (abuse). In view of the results achieved, maybe it would be more accurate to call this ”an attempted restoration.” The land in the second photo hasn’t been ”restored” it has just been used to produce products for humans — meat. It looks better because it illustrates the most important principle in human use of anything — if something doesn’t work, humans generally do something different. In this case when human management made the land look like it did when the fence was first erected ”Pretty much like it (the Liberal Environmentalism restoration) looks now, but the trees were smaller.” Humans did something different — they stopped overgrazing the land, and it recovered.

Just for fun and fairness, because the Liberal Environmentalism project was actually an attempt to restore the land to ecological health, I offer a third photo that shows another restoration, same place (a short distance away), same time. the main difference is this restoration took a few weeks instead of 60 years. The photo below shows the results of a restoration using the principles of Conservative Environmentalism. It illustrates that we can restore ecological health to the land BY using it (Isn’t that what Nature does?) better than we can by protecting it. 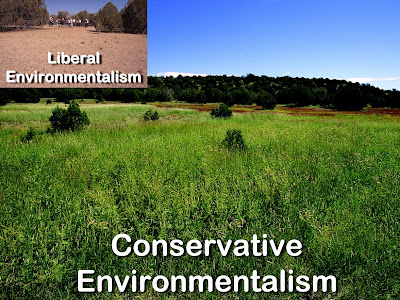 How we did this restoration is illustrated in the next photo. First, we piled rocks in a gully to combat erosion (the reason for the restoration) Next, we broadcast native grass seeds onto the land and spread hay to lure cattle to the site. The cows came (see the rocks) stomped what hay they didn’t eat into the soil turning it into mulch covering the seeds, fertilized the mixture, and moved on. The last photo in the sequence shows the healed gully. The larger photo (above) shows what this method can do to revitalize a piece of rangeland. All the grasses are natives.

HOW WE DID IT.

(Click on the photo and take a closer look.) 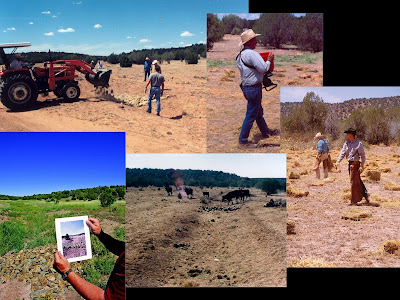