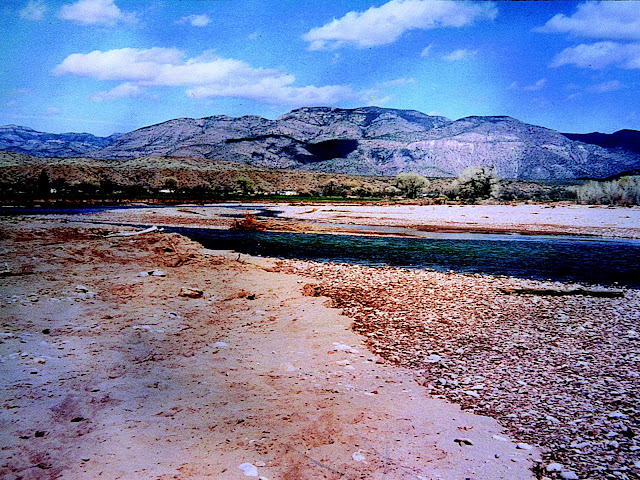 The Gila River in New Mexico after a devastating flood 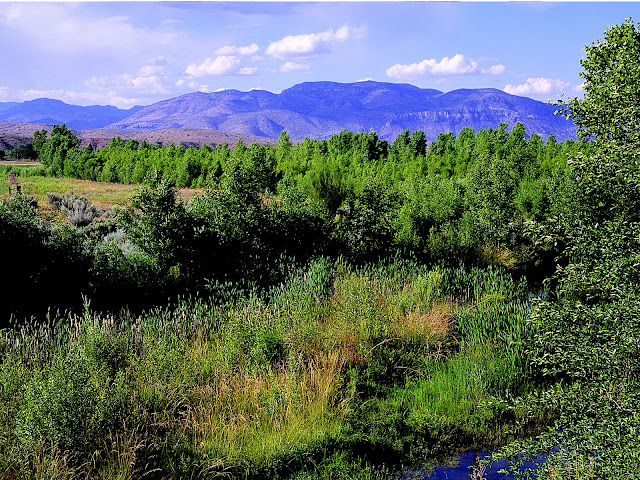 Same place after restoration
WHAT HAPPENED?!
While I’m asking whether Conservative Environmentalism or Liberal Environmentalism works best and revealing the skeletons in Liberal Environmentalism’s closet, the above photos lead us to another skeleton. This one is described in detail in my latest book, Gardeners of Eden, Rediscovering Our Importance To Nature (So were the other failures of Liberal Environmentalism I’ve pointed out so far. If you want more detailed accounts read Gardeners).
But before I get to that other skeleton I’d like to say a few things about my book. Actually, I’d like to tell you a few things others have said about it.
One reviewer on Amazon.com was almost too enthusastic.
”There are few books that conjure a simultaneously bizarre reaction within a soul: like a biblical epiphany, Dagget stirs new paradigms that made me so excited that I could barely put down the book to complete my daily tasks. Yet, I could not turn the page to the next chapter because the elegant revelations of our place in nature evoked so much thought and “wow”, that muddying the gift of a previous chapter with another would do it no justice.”
This book is in my life’s top ten list!”
A representative of a Native American college on an Indian reservation in North Dakota gave the book a unique compliment while inquiring about my availability to make a presentation at the college. I believe few other environmental books have had this said about them….
”I personally read Gardeners of Eden last year and was thrilled to see how similar the philosophies in the book are to the Lakota way of thinking.”
A pre-publication reviewer (a liberal environmentalist, by the way) called Gardeners of Eden,
”the most important environmental manifesto since Aldo Leopold’s Land Ethic.”
If you want to do a little more discovering about your importance to the environment you will want to check this book out. It is available at Amazon.
Now, getting back to that skeleton. This one involves an endangered bird — the Southwestern Willow Flycatcher. the following exerpt is directly from the book.
On a working cattle ranch (the U Bar) in southwestern New Mexico, David Ogilvie (the ranch manager) has managed a riparian area along the Gila River to such a state of health that it:
“¢ is home to the largest known population of one endangered species (the southwestern willow flycatcher) and two threatened species—the common black hawk and spikedace (a fish).
“¢ supports significant populations of several other rare species, some of which are candidates for listing;
“¢ is inhabited by the highest density of nesting songbirds known to exist anywhere in North America; and
“¢ has one of the highest known ratios of native to nonnative fish (99 percent to 1 percent) in the Southwest.
Ogilvie restored an area of riverside habitat that had been severely damaged by flood to a condition known, because of previous experience on the U Bar, to be especially friendly to the southwestern willow flycatcher. As a result, the endangered flycatcher population in that restored stretch of habitat increased from zero in 1997 to twenty-three pairs in 2002. At the time, that was the fifth largest population known. Recently, a population of a species of frogs listed as threatened was discovered on the ranch too.
(HERE’S THE SKELETON!)
The real measure of the environmental value of Ogilvie’s management is best revealed, however, by comparing the flycatcher population of the U Bar’s riparian habitat to two nearby preserves that combine to make up a comparable amount of similar habitat. In 2002, scientists counted 156 pairs of southwestern willow flycatchers on the U Bar. The two preserves had a combined total of zero!
When I mentioned this to a well-known environmental activist and author, he said he didn’t view this as a success at all. He viewed it as equivalent to creating a garbage dump that attracted grizzly bears and calling that dump good bear habitat. (I assure you that the U Bar is no ”garbage dump.” To decide for yourself, take a look at the accompanying photos. (shown above)
A few matters of clarification: The “after the flood” picture above is not a picture of the preserves. Actually, the preserves don’t look that different than the ranch (except to a Southwestern Willow Flycatcher).
SELLING SKELETONS
So, are environmentalists studying what Ogilvie is doing to make the ranch he is managing so attractive to so many species?
No! They’re trying to remove his management from the habitat along the river where it has proved so exceptional in order to make that area more like the “preserves” which the flycatchers and other species I have mentioned avoid.
This gives rise to two very important questions which are the subject of the next post coming soon.